To the loom: Veronica Usula

Launeddas and other instruments: Nicola Agus.

The context
According to the Sardinian tradition, Deinas are fortune-tellers, who have a connection with the occult and divine world.
In this play two Deinas tell a timeless story about the first divine being conceived by human beings who was female. The debate about the importance and the role of women in the ancient Sardinia is still open, nevertheless there are many researchers that support the theory of a matriarchal society at the origin of civilization. This play does not intend to enter in this debate, it wants to show myths and traditions of the culture which harmonized life with nature. The performance does not show a wistfulness for the past, nor even a desire for female power; it wants to be the research of the understanding of our time, apparently controlled by male rationality. It is a little contribution to the reflection on the false myths of reason or rather of that power pictured as a defender of rationality but which is showing more and more all its madness.
Among the Mediterranean islands, last refuge of the Great Mother, Sardinia is perhaps the one that preserved the deepest traces of veneration for the divine feminine in this time. Once upon a time, priestesses and fortune-tellers administered lunar cults in places that even today, after becoming Christians, are considered sacred. Perhaps for this reason in many churches – often born on places already holy for the ancient society- the habit of dedicating the central aisle of the church to women is still alive. Nowadays, this Sardinian matriarchy still has its protectors; no longer the Great Mother and her Janas – fairies of the Sardinian tradition -, but the Virgin Mary and her mother Saint Anna, and even the mother of her, Saint Susanna who are invoked in various and different circumstances. For centuries, in exchange of their protection, they intercede and assist: from giving birth to making of bread, from the new-born babies sprain to the evil eye.
Strictly linked to the memory of a past rich in myths and magical practices, the Sardinians have not forgotten the animist attitude of the ancient religions and, for centuries, paganism and Christianity have been living side by side so intense to create a syncretism, sometimes problematic. Our idea is to use this Sardinian syncretism mixing the literary and mythological materials of Greek culture with those of the Sardinian tradition that somehow have been nourished in the past and of which we have traces still visible.

About the play
Goddesses, fortune-tellers and next-door neighbors, from time to time actresses become narrators and interpreters of the manifestations of the female sphere in Mediterranean culture: they meet, clash, sometimes comically contradict themselves using the literature of the myths of creation, from the older to the Olympic ones and to the archetypal myths of Greek dramaturgy. Ranging from classical Greek to Sardinian folk traditions, they tell the roots and historical fruits of a culture that from the dominion of the Goddess Mother passed to that of the Olympic Gods in Greece and Sardus Pater in Sardinia, using tones sometimes ironic, tragic, or hieratic. Popular songs from female repertoire, legends and brebus (magic words) of Sardinian tradition and literature come along with the narration, accompanied by the notes of the launeddas, traditional Sardinian instruments. The artist Veronica Usula follows the tones and the rhythms through the frame work. Some videos is projected in different moments of the representation. The music written by the musician Alessandro Olla creates a sonorous suggestion: reinvention of an archaic ritual, evoking the sacred celestial body of an anthropomorphized Earth, cosmic Humanity. 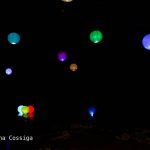 Manifattura tabacchiArchivio, In distribuzione, In evidenza 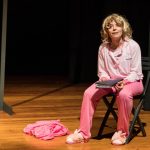